The next time you watch The Voice, The X-Factor or Britain’s Got Talent, spare a thought for what happens to the set when the series comes to an end. Rather than let it simply sit in a studio until the next series is filmed (which was my initial and rather naive assumption), it is of course dismantled and taken away for storage. And if it is entrusted to film-set storage specialist Set-A-Side Storage in Oxfordshire, it ends up in one of 40 units on a former army camp.

“For about 25 years I used to work for different TV production companies in London as prop master on films and television series, until the BBC and ITV stopped doing everything in-house and wanted to contract out things like storage. It was my job to see what could be done with the props before the next series. At the time, there was nowhere to store them so I started a small company and carried on working as a prop master until it got larger and larger. Eventually I decided to leave films and concentrate on the company where I had five employees working full-time.

When I left, we had the contract for the BBC to do all their sets.

”With TV programmes the work is cyclical. The production companies use the sets for around three months of the year and then can store them for the remaining nine months of the year. However, film studios, particularly American ones, operate differently.

“With films, once they’ve completed filming they return to the states and edit the film, show it to a few people and then return to the UK to make a few changes. This means they need the original set, so they come to us to look through the items, say ‘we’ll have that and that’, and then go off and shoot it and then, when they’re happy with it, they sign off the film and return the set to us,” explains Steve Gardiner, Set-A-Side’s site manager. 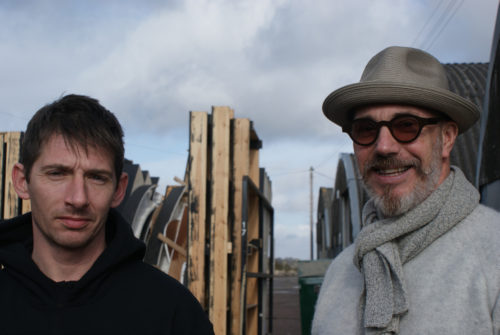 But even then, the storage specialist can expect a visit from a client at any time.

Beales again: “Before a series of X-Factor, the producer comes onsite with the designer and stage manager to go through all their stuff. At the end of the series just before Christmas they bring everything down here and then, come the new year, they think ‘Let’s see what we have, sort it out and dispose of what we don’t need’.”

Unwanted props feature a variety of materials including metal such as chicken wire, fibreglass, plastics, carpets and wood; in fact, a great deal of wood.

To begin with Set-A-Side began recycling unwanted materials by separating them the traditional way, but in 2016 decided to invest in a shredder, or the ‘chipper’ as the team calls the single-shaft shredder that they purchased from Fercell.

“It was becoming more and more expensive to dispose of the wood and as it was part of the service, we offer we found we were investing quite a lot of money in the process. We tried a company who hired us a mobile chipper, so a unit at one of the other sites was used to smash all the wood and, when it was full, we would bring the mobile chipper in for a day on the back of a huge lorry. Basically, it was a case of trying different things as it’s a lot of money, but you have to do it properly and not half-heartedly,” continues the former prop master who is clearly not someone to flinch from a challenge, especially one that is outside his comfort zone.

“It was a whole new learning curve looking at what we needed. We had to decide what we wanted from a chipper and then my partner, James Dillon and I went to three different companies that import them and we opted for the Weima machine through Fercell.”

According to Beales, he and his partner chose Fercell because “it was the best machine for what we wanted and also because they gave us all the information we needed. We felt we understood the shredder a lot better.”
The company owner pauses for a moment before adding: “We went to look at another shredder in the Lake District and the company did not seem too bothered about selling it and couldn’t give us much information. Fercell were a lot more helpful which is the reason my partner, James, and I felt happy with it.”

Once the choice of shredder had been made, Beales and his team then looked at how they could set up a designated area and an efficient system to feed the waste wood into the shredder; in particular how a JCB can manoeuvre around the unit to gain easy access to the hopper.

In the end, it cost Set-A-Side the best part of £300,000 to set up its shredding operation. This included the cost of the machine as well as the expenditure to design a bespoke unit around it. This involved a three-phase power generator large enough to run the shredder, along with a container to put the chippings in and the JCB to load the hopper.

“In the long run, it’s all about how the company is changing and this is one of the things that is needed to take us forward,” comments Beales philosophically. Once the installation was complete, the storage experts settled down with their new acquisition.

“It will munch anything you put through, but the biggest things we worry about is contamination,” explains Gardiner. “People taking chippings from us will not want to take it, and the last thing you want are eight tonnes of chippings that no-one can use,” he adds wryly.

The chippings are sent to a company that uses the material to burn as biomass. “We have put through a 12-foot tree that was a prop as well as a telegraph pole and sleepers. It just munches through everything,” continues the site manager, who admits: “I like to test it and it’s never let us down.”

Fercell has returned to Set-A-Side a couple of times to help resolve teething problems. “We had them come back when one of the boys had knocked the machine with the JCB that was filling the hopper and consequently it was misaligned,” recalls Gardiner. “The other occasion that Fercell came to visit us was to have a look at a better way of doing things.”

Beales adds: “We were offered an extractor to help remove the dust generated by the shredding, but instead we decided to put up scaffolding around the bunker holding the chippings and we designed strips of plastic to enable access in and out of the bunker.”

Would Beales consider buying another machine from Fercell? “Yes, I would. The shredder does what it’s supposed to do.”

The set-up with the shredder at Set-A-Side is running so smoothly now, the client has a potential Weima customer coming to site to learn how the storage specialist has incorporated the shredder into its operation.
“Rhythm and routine is what it’s all about,” says Gardiner. 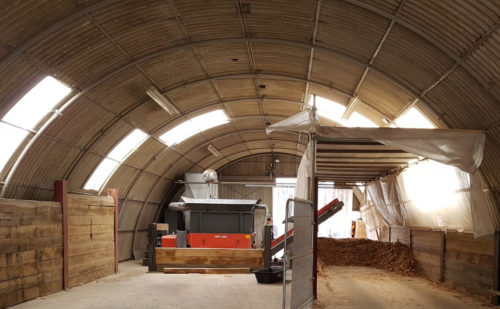 The shredder selected by Set-A-Side storage is a WEIMA WL20 single-shaft shredder. “It is perfect for the woodworking types of industry which typically have high outputs of activity,” says Rob Woodhouse, service manager with Fercell. “This machinery makes light work of linear and lump wood off-cut timber waste with its 2,000mm wide ‘V’ rotor and WAP gear box. Power outputs of between 55kW and 110kW can be fitted to this model.”

Material is fed through the hopper to fall in front of a hydraulically operated drawer that feeds the material, according to the load, onto the rotor. The material is shredded between the rotor knives and a fixed stationary counter knife when chips are conveyed from the output of the machine by an air extraction system, screw or belt conveyor. In the case of Set-A-Side, the client chose a conventional conveyor system with a 2.5m discharge height.

“The process takes a matter of seconds and in minutes a whole pile of wood can be transformed into space-saving wood chippings,” adds Woodhouse.